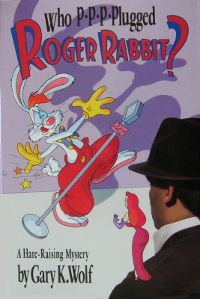 Welcome back to Toontown where Toons live side-by-side with humans. The whole Who Framed Roger Rabbit cast is here: Roger Rabbit, Eddie Valiant, Baby Herman, and of course Jessica Rabbit, the sultriest woman ever "drawn that way." They're up to their old tricks in a whimsical new mystery by Toontown's original creator, the man who first brought these delightful creatures to life.

This will come to you autographed and personalized. It will bear the one-of-a-kind Roger Rabbit stamp authorized only for use by Gary K. Wolf.

E-mail for more information or to order.

Who P-P-P-Plugged Roger Rabbit? is as bright and fresh and fascinating as the original.  Fans of the first book and film are in for a Toonful treat.

Michael Eisner / Chairman of the Board and CEO /


Reprint of the entire first page of the novel under the heading Auspicious Beginnings.


Unabashed P-P-P-Plug!  If you like Roger Rabbit, you'll adore Who P-P-P-Plugged Roger Rabbit? by Gary K. Wolf, the man who created Roger and the rest of the Toon crew.


A good, fun read.  Eddie Valiant out-Marlowes Marlow and out-Spades Spade.  The humorous strength of Who P-P-P-Plugged Roger Rabbit? lies in Wolf's one-liners and quirky send-ups of 1940s hard-boiled detective patter.  The bodies drop like names at a Hollywood party.  Wolf's prose is consistently witty, the plot is fast-paced and quirky, and he can craft a decent mystery with a sense of fun.


The Toonish imagery, the slapstick humor, the double entendre dialogue all contribute to turn this book into a Technicolor vision as you read.  From the first "P-O-W" to the last "K-A-B-L-O-O-E-Y," the fun is never ending.


The welcome mat is out again at Toontown.  Expect the usual surreal hi-jinks.  In Wolf's crazy universe, a never-never-land gag is always around the corner.


Wolf freely mixes Toons and human characters in situations both real and surreal.  It's a fast and funny story made up of equal parts of cartoon pratfalls, tough-guy detective action and sly humor.  It's an endlessly entertaining tale with jokes and puns that leap at you like out-of-control cartoon speech balloons.


Stay Tooned.  If you enjoyed the movie Who Framed Roger Rabbit, you'll have to run out to the bookstore and buy its sequel.  It's a good, hare-raising mystery.


Eddie Valiant, the hard-boiled private eye who makes Sam Spade look like Little Lord Fauntleroy, takes the lumps and solves the mysteries while spouting the most incredible array of similes ever committed to paper.  There haven't been such characters since the Tin Man and the Cowardly Lion.  The wildest adventure since Alice went through the looking glass.  The highest form of comedy.


When the folks at Disney make P-P-P-Plugged into a m-m-m-movie, I'll be f-f-f-first in line for a ticket.


It's a hoot.  Wolf obviously gets as big a kick out of the convoluted plotting and the exaggerated private-eye lingo as he does the interactions between humans and Toons.  The ingredients make a rich confection for anyone addicted to pop culture.


A marvelous adventure in Toontown, a hare-sute tour de farce.  In this latest cotton-tale, Roger is back with the same madcap characterizations we loved in the film.


Wolf has managed to take a potential one-joke premise and milk it for all it's worth.


Those thespian Toons are back.  Readers are going to love it.  And the film is going to be great.


Murder and mayhem in Hollywood's shady underworld.  A humorous and intelligent mystery.


Wolf does it with panache.  If you want high quality entertainment, grab this book, then follow Eddie Valiant's advice in the introduction: Relax, hang on, and enjoy the ride.


Involving reading which will be enjoyed by fans.


The long awaited sequel to Who Censored Roger Rabbit?  Great fun throughout.


Imagine a comic book with no p-p-p-pictures.  It sounds dull, but when Gary K. Wolf writes about Roger Rabbit and Eddie Valiant, it isn't.  Valiant discovers just about every crime taking p-p-p-place in Toontown.  The book requires readers to exercise more imagination than most.  Despite its silliness, the suspense and mystery of the book and the mischievous rabbit will hold readers of all ages.


Another offbeat mystery story as good as the first book and the movie.


Wolf is a master of word plays and has great fun with the English language.

The Road To Toontown